Ah, the Seventies. When Bond was still Bond (well, sort of)... 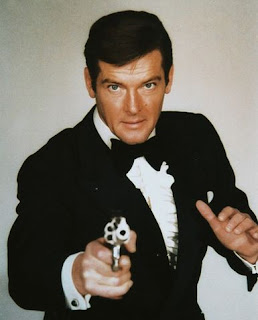 And not a whining pussy who dumped his girlfriend when she came 'too close' (among other things)... 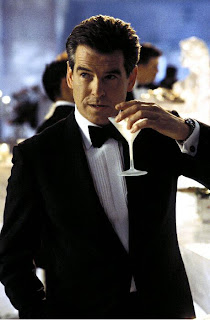 Or a dumb, humorless thug whose investigative skills amount to killing people and checking their cellphone for the next Major Clue... 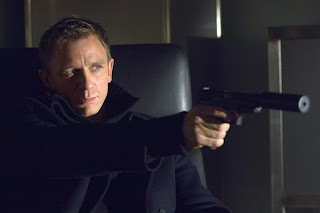 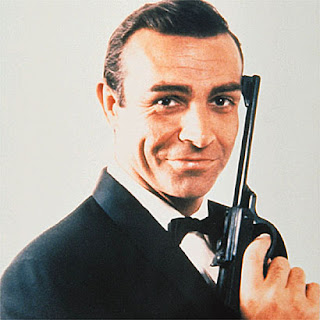 ...got together with producer Kevin McClory and (ostensibly) thriller writer extraordinaire Len Deighton to write a script for an alternate Bond film. I say ostensibly because the copy I've read has Deighton's name crossed out on the cover page, acoompanied by a small handwritten note from Deighton that nothing of his is in the script.

The reason for the attempted alternate Bond series, and for the fact that it's a remake of Thunderball (as was the later Never Say Never Again), can be found in the amazing book The Battle For Bond, by Robert Sellers and edited by Tomahawk Press. Any Bondophile owes it to themselves to get this - it's an awesome treasure trove.

We're going to concentrate on the fruit of Connery, McClory and (ostensibly) Deighton's labours, the script for Warhead, which itself was based on the script for James Bond of the Secret Service. The differences between the two versions are minor - JBOTSS is even closer to Thunderball, having Emilio Largo as the main opponent. Apart from this, the opening sequence is clearer in the earlier script, and the henchman and the underwater base are renamed, and Largo's demise is a copy of the end of the original film. But apart from that, these scripts are largely identical.

In order to get everyone up to speed, we'll start with the:

A plane is swallowed in the Bermuda Triangle by an movable underwater city/secret base, Aquapolis.

Immediately after, we meet James Bond at a tropical diving training facility, Shrublands, up to his usual seductive tricks. At the resort we also meet CIA agent Hellinger and his doctor and lover, the luscious Fatima Blush.

Back at Aquapolis, Blofeld arrives for the annual SPECTRE board meeting, together with his giant Mongol henchman, Genghis. After dealing with some incompetent members, he reveals his new plans for the future: SPECTRE will lay claim to all the world's oceans. The first demand to the nations of the world will be the immediate ceasing of all pollution - any country that disobeys will have its elected leader killed.

In order to get the nations of the world to agree to SPECTRE's dominance, they will launch Operation Hammerhead, and for this they need to get the nuclear missiles from a wrecked Russian submarine.

At Shrublands, Bond meets up with Felix Leiter and attends a CIA briefing where it's revealed the Chief Secretary of the UN has gone missing with his plane in the Bermuda Triangle, and an anonymous threatening message has been issued to all nations that this is but the first step in their plans. Leiter reveals to Bond that the CIA is going to salvage a Russian submarine wreck, and Hellinger is the expert in the matter.

That night, Fatima helps smuggle Genghis and a man looking just like Hellinger inside Shrublands. Bond notices something is amiss, and in order to save the mission Fatima seduces him. As they make love in a jacuzzi, Hellinger tries to drown Bond by altering the controls of the jacuzzi and then is murdered by Genghis and replaced by his double, Petacchi, who rescues Bond and Fatima from drowning but immediately gets into a quarrel with Bond.

The next day Petacchi tries to kill Bond during a parachute lesson. Bond survives and beats up Petacchi.

But Petacchi has other things to worry about: soon he's on board the CIA vessel in order to steal the nukes for SPECTRE, using an electronic device to complete sabotage the salvage ship. The operation succeeds but Petacchi is blown up by Blofeld once the mission is accomplished.

Bond is about to return to England, and Fatima ensures that she accompanies him. He doesn't trust her, but enjoys her company.

At MI6, Bond is briefed by M and Q about the salvage operation gone wrong, and the involvement of SPECTRE is established. Bond is to return to the Bahamas to look into the matter.

Returning home, Bond discovers he has a new cleaning lady (in fact a SPECTRE agent trying to kill him), and then Fatima comes over for some spirited lovemaking. Two men intrude in Bond's home and he takes them out, then Fatima and the SPECTRE cleaner both die when the bomb placed under Bond's Aston Martin blows up. It turns out the intruders were MI6 agents sent to protect Bond from an assassination attempt.

Soon after, Bond and Q find themselves on their way to Nassau, in a military transport plane, and Blofled has been pegged as the main suspect.

Bond and Leiter go to investigate Shark Island, the property of Blofeld, by night, while Bond is supposed to face Blofeld in a backgammon tournament. In Blofeld's home, Bond discovers Fatima's identical twin sister, Domino, who reveals she knows Blofeld is to blame for her death, wants revenge on him, and allows herself to be seduced by Bond. She promises to help him.

Bond and Leiter then go to investigate the laboratory on the grounds, and discover a prototype for a robot shark. They are interrupted by Blofeld, Genghis and his guards, and a fight ensues. Genghis finally subdues Bond and Leiter, being invincible.

Blofeld talks to professor Maslov, inventor of the robot sharks, about the plan: the sharks will be used to deliver the nuclear bombs to the target of Blofeld's choice. Bond and Leiter are put into a death trap - strapped in a Rapid Saturation Chamber which is shot through the tube connecting the chamber to Aquapolis - only Aquapolis isn't at the end of the tube!

Meanwhile, Blofeld has discovered Domino's betrayal and is threatening her with the robot shark. Maslov intervenes.

Q and M decide to have troops invade Shark Island, finding it deserted. Bond and Leiter recover from their ordeal and discover that Domino managed to save them. Now, however, she is missing together with Blofeld and all his accomplices.

A message from Blofeld is discovered in which his blackmailing scheme is revealed. Unless the UN agree to give SPECTRE complete dominance of the oceans, a major city is going to be destroyed, followed by the dislodging of the Antarctic ice cap if necessary.

Bond and Q ascertain that New York is the most likely candidate for being a SPECTRE target, and they quickly meet up with the heads of the CIA to mount an operation to stop Blofeld. Bond deduces that the sewers will be the best way for Blofeld to carry out his threat, and a team of divers is sent down to search for the robot sharks.

Meanwhile, Blofeld and company are holed up in the Statue of Liberty, which has been transformed into a Spectre base. The nukes are on their way to midtown Manhattan.

The divers get killed by the robot sharks, and Bond goes down into the sewers after them. He is attacked by the sharks and by Genghis, but manages to survive. Genghis is ripped to shreds when he falls into the shark-infested waters, and Bond manages to disable the shark with the bomb. Q shuts the warhead off just in time.

This is the signal for the assault on the Statue of Liberty. Bond joins the fray, but Blofeld escapes to Aquapolis. Bond follows but is unable to enter the undersea city and is dragged along by it as it speeds off into the oceans. Blofeld sets course for the Antarctic, ready to destroy the world.

Professor Maslov, however, has had enough and frees the captive Domino, asking her for help. Bond, meanwhile, accidentally gets inside Aquapolis and gets into a huge fight with SPECTRE agents and Blofeld. Blofeld gains the upper hand, but when Aquapolis hits an undersea rock and lurches, Bond presses a number of random buttons, which result in the destruction of the city and Blofeld being shot into the ocean depths. Bond saves Domino and they escape in Blofeld's luxury mini-submarine, and enjoy the compulsory post-bloodshed-and-massive-destruction coital epilogue.


Stay tuned for the rest of the review tomorrow!